Appleton Downtown, Incorporated (ADI), today announced a major brand change – the first in more than five years – for Downtown Appleton, including a new promotional logo and slogan, specifically designed to reflect the Downtown’s evolving position as a destination in the State of Wisconsin – a destination that’s growing a firm economic foothold in the region with its “creative economy” philosophy that blends the arts, music, technology and culture together in a walkable mile-long space. 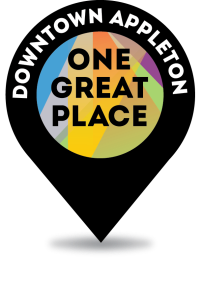 In announcing the new marketing positioning, Stephany said the new brand aligns well with national tourism and hospitality industry trends that highlight the significance in placemaking as a key economic driver and echoes the recent national awards garnered by the City of Appleton, including the American Planning Association’s (APA) 2014 designation of Downtown Appleton’s College Avenue as the “People’s Choice” Great Place award winner, Liveability.com’s February 2015 ranking of Appleton as the fifth most affordable place to live in the country and Forbes magazine’s July 2014 choice of Appleton on its list of “50 Best Small Places for Business and Careers.”

“The new brand spells out and affirms what area residents and many visitors across the state have already come to know that Downtown Appleton is one great place for arts, culture and entertainment seekers with a year-round Farm Market, performances at the Fox Cities Performing Art Center, ongoing original music events, annual festivals and a full slate of summer activities that draw as many as a half-million attendees or more,” Stephany said.

Stephany encouraged Downtown stakeholders to make the new slogan their own as Downtown ambassadors sharing the brand on their websites and social media platforms to tell their stories of why area residents and business owners believe “Downtown Appleton is One Great Place!”

In addition to its many crowd-pleasing special events and activities, Downtown Appleton is also known for its 60-plus unique shops, more than 70 pubs and eateries and 19 museums, galleries and performance venues, as well as notable landmarks including Lawrence University and prominent special events such as Octoberfest, Mile of Music and the Downtown Appleton Christmas Parade.

ADI is a non-profit advocacy source for businesses and merchants in Downtown Appleton.  For information about upcoming Downtown Appleton events or ADI services, contact ADI at (920) 954-9112 or visit www.appletondowntown.org, on Facebook at the Appleton Downtown or Downtown Appleton Food & Fun Fan Pages, or on Twitter @downtowncool and @dwtnappleton.